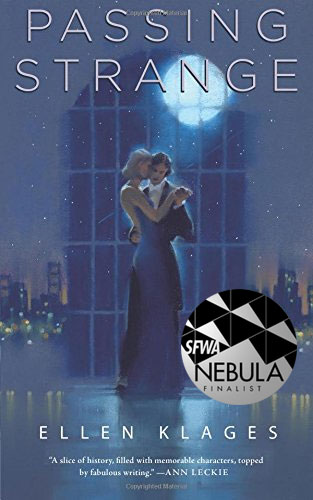 San Francisco in 1940 is a haven for the unconventional. Tourists flock to the cities within the city: the Magic City of the World’s Fair on an island created of artifice and illusion; the forbidden city of Chinatown, a separate, alien world of exotic food and nightclubs that offer “authentic” experiences, straight from the pages of the pulps; and the twilight world of forbidden love, where outcasts from conventional society can meet.

Six women find their lives as tangled with each other’s as they are with the city they call home. They discover love and danger on the borders where magic, science, and art intersect.

Inspired by the pulps, film noir, and screwball comedy, Passing Strange is a story as unusual and complex as San Francisco itself.

This is a deftly crafted tale of love, solidarity, and magic brought full circle. Klages folds history and the modern world into a thoroughly satisfying novella that’s rich in detail, warm in regard, and clever in execution.

Ellen Klages deftly weaves science, magic and religion in this historical fantasy with a strong vein of pulp. A moving and genuine love story.

A masterpiece of queer fantasy, this novella is ultimately as charming as it is playful, with moments of heartbreaking drama. Klages pulls off a neat trick in building an urban fantasy world suffused with real queer history, using the magical elements in parallel to the lives of the women at the center of the story. The author is one of the voices expanding ideas of what sci-fi and fantasy can be, and the genre is so much better for it.

Klages deftly weaves each thread to a climax both bittersweet and empowering while demonstrating historical knowledge and immense fondness for her subjects and setting. For fans of speculative fiction with a strong sense of place.

A tightly written plot and an unyielding sense of wonder… Passing Strange is a quick, enchanting read.